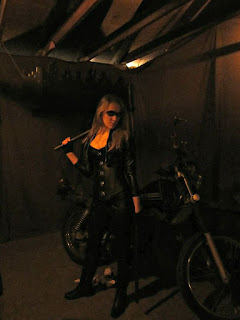 Last Halloween I went costumed as the Arrow tv show version of Black Canary!  The Sara Lance version that is, don't even get me started on a Laurel rant. This costume was a combined effort of purchased pieces and a couple that I made or altered, so it didn't take quite as much effort as others. I've now worn it a couple of times for Madison Comic Con and Phoenix Comic Con.
Google image search is most helpful in finding costume detail.  Such as the picture below. 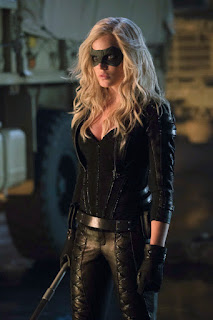 Caity Lotz as Sara in Arrow.  I do not own this image. 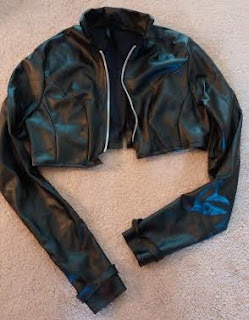 The jacket is the most involved part of the costume as it is the only part that I made entirely from scratch.  Now Sara's jacket is very short, coming to just under the bust and doesn't even remotely look like it could close in the front.  Not a very practical jacket.  That makes finding a pattern for exactly what you want almost impossible.  I used the jacket pattern found in the steampunk pattern below: 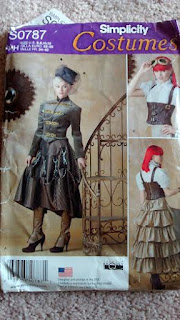 (I'm hoping I can use it for that fun skirt sometime)
Honestly it starts out nothing like how it should look.  Yes, yes I know.  My mom watched me pick out the pattern and looked at my reference pictures and laughed.  BUT it turned out almost exactly how I wanted it too!  This is also one of my favorite patterns.  I've used that jacket pattern for three different costumes now and it's worked for me every time.  It's completely worth its weight in gold! For this pattern to turn into Sara's jacket, it does take a bit of altering, but nothing too crazy.  Essentially I made the jacket and then hacked a few things off.  Unfortunately I can't show any in progress shots since I made it almost a year ago.

Fabric: I used a black suede cloth from Joann's that resembles leather and that is fairly stretchy.  And waited until I had a coupon.  Because I like not spending money.

Alterations:  Make the jacket according to the pattern, but do not finish the front seams or the bottom hem.  I simply put the jacket on and measured (haphazardly) where I would like the jacket to end.  From there I pinned it up and hemmed it.  I suggest measuring more accurately than I did.  At this point I just wanted the jacket done and it is not an even hemming job.
Sara's jacket also has a little slit up the back which serves absolutely no purpose, but was easy enough to add.  I ripped out a few of the stitches I'd done on the back panel and hemmed both sides.  Easy enough, but unnecessary if you don't feel like it. 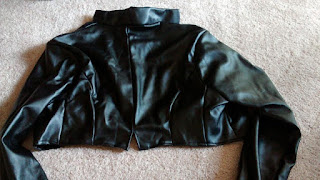 Sara's jacket has all sorts of straps and such nonsense all over it.  I had thought about adding more of these, but when I pinned different things to the jacket it looked out of place and kind of silly.  I did, however, add the smaller straps around the base of the sleeves.  Sara's jacket is technically 3/4 length sleeves, but I made them full length and the pushed them up.  Using a long skinny scrap of fabric I measured out the width I wanted and hemmed both sides.  Then, because Sara's jacket is only 3/4 length sleeve, I measured around my forearm for the length of the jacket. Sew those suckers on right as bottom of the sleeve and you're good to go!  A small addition but looks pretty good. 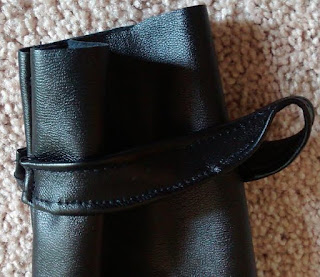 (Surprise! I didn't bother to hem the sleeves...oops)
Last but not least, the zipper that does nothing!  I'm not entirely sure why it's even there since there's no way this jacket would ever close over her.  But nonetheless, might as well add one. Unfortunately, since no one would make a jacket this impractical just to wear, they don't make separating zippers that short!  Hooray!  I just bought a silver one that was as short as I could get, cut it down, and sewed that on.  I don't quite remember how, but the actual zipper came off during the sewing process, and since this is just for looks I didn't try and reattach it.  You can see the shininess of the zipper teeth in the first picture.

And that's it!  Now put on your classy jacket that will not at all keep you warm, and find the next couple of pieces! 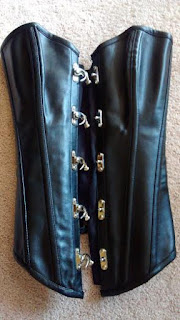 (I went as plain as possible so I can use it for other costumes)
I can't help but laugh at the lack of combat effectiveness of wearing a corset to clean up the streets of Starling City.  I can't move properly in this thing let alone fight crime, but whatcha gonna do.  I am no where near skilled enough to make a corset so I visited the trusty amazon.com and purchased a plain black leather one.  It does have clasps on the front which Sara's does not, but I didn't find that too distracting.  Just find a nice, plain, overbust corset and you should be good.  I went the non expensive route as per my usual.  I think this came to under $20.  Have someone help lace you in so as not to dislocated your shoulders. 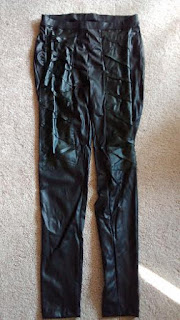 (Or at least what sort of qualifies as pants)
While I did buy these pants they are still a pain in the butt in how I tried to add to them.  You can easily make your own pair of leggings (they're like two pieces of fabric), but I was in a time crunch and bought this pair at Forever 21 on the super sale rack.  However, Sara's pants have that annoying crisscross pattern going down the front.  I thought that would be very easy to add!  I was wrong. 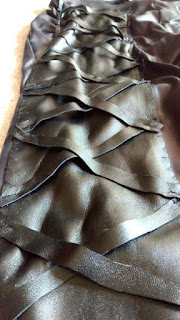 (It does look cool...)
After much trial and error I found that the best way (for me anyway) to add the pattern was to cut panels the length that I wanted the crisscross and to sew on about 14 itty bitty strips of extra fabric per leg. After more trial error, I discovered that sewing them all the way across also does not work because then it does not stretch with your leg. Grrrr... I too each strip and pinned it where I wanted and then used my machine to sew just a few stitched on each end so that the middle was free to stretch and not be hindered by extra non movable thread. 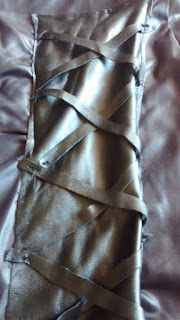 (Notice the right side is a tad wonky)
After you have all the strips on you can sew it to the pants! I also ran into trouble here.  Using a machine does not work.  At all.  It starts out okay and then as you try and squeeze the leg part into the machine, it starts to pucker and sew not at all how you want it to and it end up in a mess and you start to swear and it gets ugly.  If you want to start on the machine go for it, but after my first fiasco I took to hand sewing.  Yes, hand sewing.  Make sure you put the pants on and pin while it's on you (be careful!) where it needs to be so that you don't rip the stitches out when you put them on.  I just did a simple stitch all the way around and then really hoped it would stay.  It has so far! 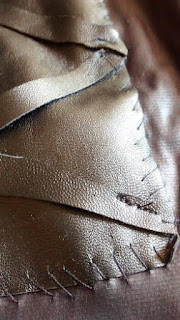 (I suggest having chocolate or snacks around during this part)
A bit tedious, but I have to admit, it looks pretty good at the end.

Boots and Gloves
Ah the easy part!  I used a pair of fingerless motorcycle gloves and a pair of plain black boots coming to just below my knees.  I recommend no heels.  A) more comfortable and B) Sara doesn't wear heels.
And that's it. 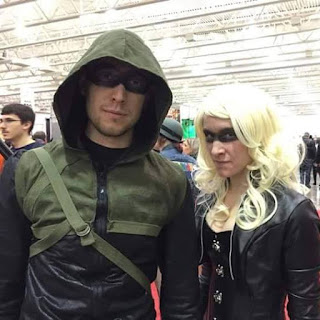 (Madison Comic Con with my Arrow)
Wigs are a whole other kind of special to deal with and if you simply don't want to, you may stop reading here and do a happy dance that your costume is complete!  My first foray into the Black Canary land I didn't wear a wig.  My hair is blonde and I just said good enough and moved on.  But the second and third times I wore the costume I went with a wig to get that super light blonde color. Again, I am as cheap as possible on my costume pieces so I bought a $12 wig from amazon and it looks like it.  It's a very cheap wig that you can't do too much with.  As much as I hate to say it, if I do this cosplay again, I might look into getting a better wig.  But if you just want it for halloween or just for a day, then by all means go the cheap route!

All Done!
You finished!  Huzzah!!  Now wear your costume proudly!  Below I included a couple more pictures of my finished product. 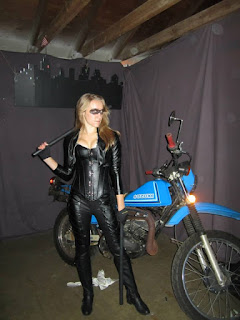 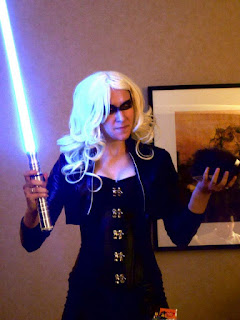 (Canary with a lightsaber and a tribble.  Because why not)
Posted by JanBear at 1:54 PM 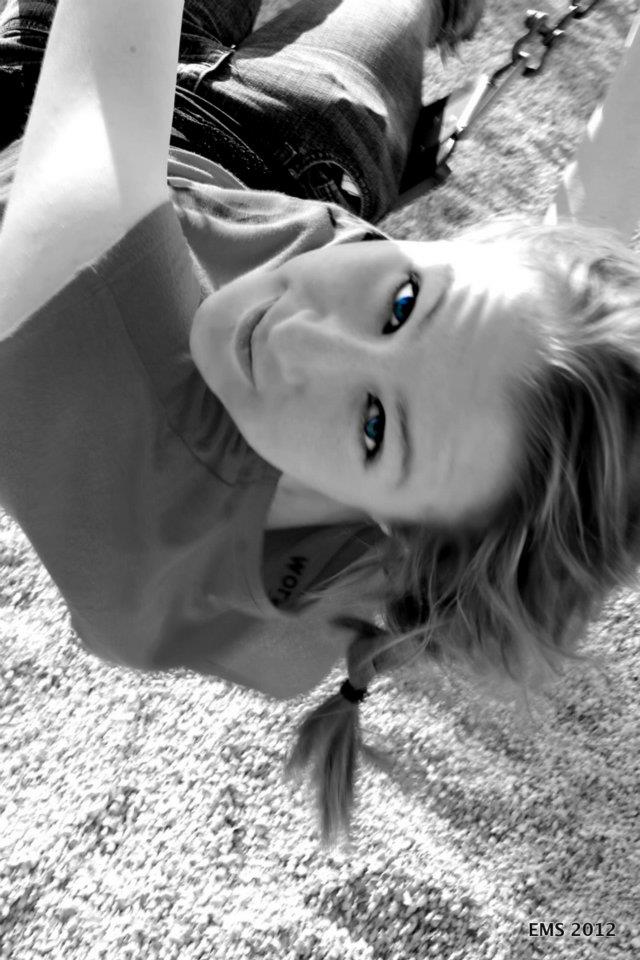 Every time I make a costume whether it be for comic con, Halloween, a movie premiere, or just for fun, I always end up making things up or modifying and I'd like to share my ideas with you!
Theatre. Music. Dance. Books. Art. Elves. Pirates. Wizards. Detectives. Jedi. Browncoats. Hunters. Superheroes. Costumes.
Fangirling like a champ!